FIRE ON THE MOUNTAIN AT BAYFEST

Thick mud caked my white tennis shoes as I inadvertently stepped in an unfortunately placed mudhole while exiting the clogger van.  My feet looked three sizes bigger than normal.  “What a mess!  No one will be in the audience,” I kept muttering to anyone within earshot.  Intermittent raindrops had graced us with their presence throughout 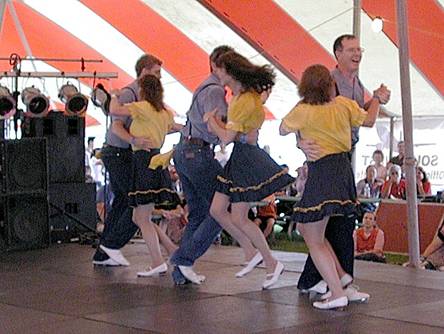 portions of our trip to Corpus.  By the time our troupe had walked the few blocks to the festival grounds I had succeeded in cleaning my tennis shoes using the trusted method of standing in each pool of rainwater we happened to pass.  The cloggers would laugh and make fun of me in the middle of each puddle.  After successfully becoming mud free my spirits lifted considerably and I began to joke, “Jeff, you’d better do that step right because the audience is going to be giant.”  Boy, was I right!  No more raindrops fell, Jeff did all the right steps, and the two shows we did at Bayfest had the rather large tent packed to overflowing.

Earth Day symbolizes a return to nature so we revisited our roots and provided traditional, freestyle dancing at our annual performance there. Memories emerged of early settlers gathering after a hard day’s work of barn-raising; the fiddler would pick up his bow and the dancers would shake the dust from their weary feet.  We demonstrated mountain figures such as Take a Little 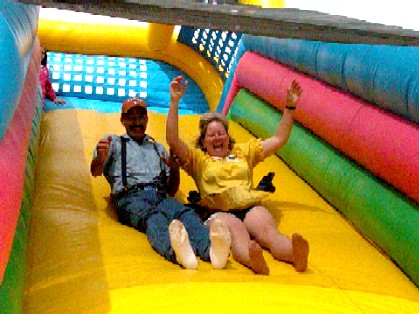 Peek (now run home and swing your sweet, step right up and peek once more, …), Right Hands Across (now back by the left and don’t get lost), and many other Southern Appalachian Mountain Figures.

Church festivals clogged every weekend (pun intended).  St. Gregory’s Catholic Church played host to our bluegrass laced performances and then we planted our best foot forward at Colonial Hills United Methodist Church Family Fest.  The call of the dance even lured us to do two performances in one day as we braved the menacing threat of raindrops to perform at St. Rose de Lima.  After the show Lane and Sheryl continued the merriment on the downhill slopes.

Back to Main Page