A sea of brightly colored bodies streamed by, completely filling two lanes of the street in downtown San Antonio.  A multitude of arms waved joyfully toward us in acknowledgement as the individuals to whom they were attached raced steadily onward.  The throbbing arches of my aching feet gently reminded me of the 30 degree angle of the stage upon which I was poised.  Our taps beat out a staccato rhythm on the wooden planks of the flatbed truck which just happened to be precariously blocking an entire lane of one of the busiest streets of the Alamo City.  “Good morning, everybody, we’re the Fire on the Mountain Cloggers and we are so proud to be a part of the entertainment during the Race for the Cure.  Keep on running.  Keep on walking.  We are coming together here today for an extremely worthy cause.” 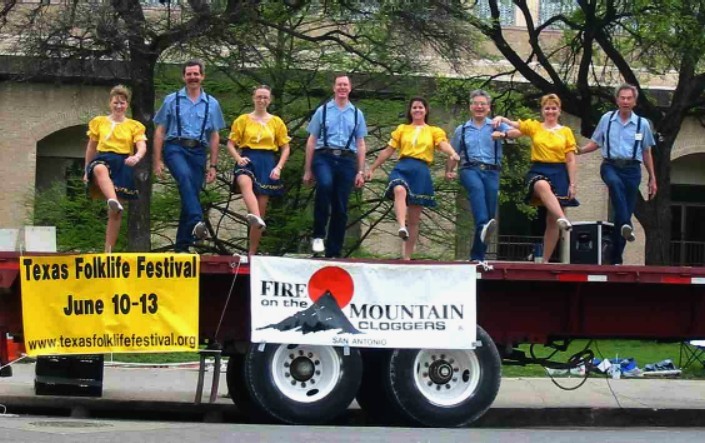 in some permanent damage.  The occasional bus or delivery van that rumbled past directly in front of our faces left not only a faint whiff of diesel fumes, but the realization that there was no room for error.

Clogging four feet in the air perilously close to the passing traffic might be considered a thrill for the stout hearted few.  Hey! Watch the mirror on that city bus.  Whew!  Suck it in, Ron.  When my contact told me that we would be performing our dances on Stage 6 at the Race for the Cure, I was curious about the location and the exact dimensions.  Our flatbed truck stage boasted the following attributes:  four feet tall, seven feet deep, 48 feet wide, no railing, and a not so gentle downhill slope toward the back.

Perched on the edge of the tilted platform, a dancer had to either bend the knees to maintain balance or lean forward, distributing the majority of the weight on the toes.  No room for slackers in this group.

Our viewers consisted of a steady stream of runners and later on, walkers.  It was like dipping your toe in the San Antonio River; the current constantly brought a new and changing audience for our clogging performance.  The three-mile race began at the AlamoDome with thousands of participants.  They raced or walked along a set route, with a major turn at the corner of Alamo Street (We ARE in San Antonio you know … yes, the Alamo itself is only a few blocks away) and Market Street.  Strategically placed at this vital corner turn in the race route, the Fire on the Mountain Cloggers entertained approximately 25,000 individuals in the space of an hour and fifteen minutes.

We were originally given instructions that we could choose to dance a while, wave a while.  However, in the heat of the moment, we chose to clog, clog, clog.  The dancers rotated out for each routine as the runners/walkers passed by.  I am confident that, when compared impartially, our “workout” was almost equivalent to that of the official participants.

On a more serious note, Tom Bower, San Antonio Express-News describes the somber motive behind the Susan G. Komen Race for the Cure:  “The names … were printed on pink placards, silk-screened on T-shirts, painted on hand-carried signs displayed by the racers, joggers and walkers who crossed the finish line.  The names were of breast cancer survivors and of those who have died …”  However, the atmosphere during the Race itself was not one of despair and grief, but of joy and hope.  The annual Race represented an opportunity to join together to support research for a cure for this deadly disease.

Therefore, the Fire on the Mountain Cloggers of San Antonio, Texas were most proud to be a part of the Race for the Cure.  We look forward to next year and, yes, we’ve already accepted the invitation to return to our favorite stage.