Clogging is a pastime that carries the mind and feet back in time to the days of our ancestors.

Fire-on-the-Mountain Cloggers perform to bluegrass music. Both clogging and bluegrass are art forms that developed from traditional folk music and dance in the Appalachian Mountains. 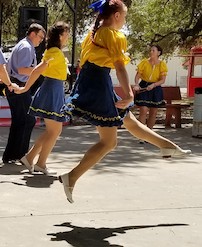 There are many versions of the history of clog dancing in the United States. Clogging is generally thought to be a combination of the various dances that settlers to the Appalachian region brought with them. As the different cultural groups mingled and combined so did their dances, until what we now know as clogging was formed. 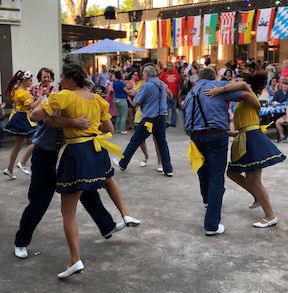 During performances the Fire on the Mountain Cloggers demonstrate some of the steps such as the Lancaster Clog Dance from England (which at least gave the dance its name) as well as the polka step, from Czech and German origins, which is the basic rhythm for clogging. The most influential of the European cultures is that of the Irish, with the Hard Shoe dances that bear a striking resemblance to clogging.

Elements of these various dances could be seen as people living in the Appalachian mountains taught one another what steps they knew. The different dances gradually blended together to create a new dance form—clogging.

Back to Main Page

© All images and text used by permission.